We let go of Achilles Saturday. He quite abruptly became lethargic. Had difficulty standing, refused food, so we went to the emergency vet.

The exam revealed that his pulse was thready, she was unable to clearly his heartbeat, his paws were cold. Something sinister (the vets’ exact word) was happening. it would have taken extensive testing and diagnosis to find out what was going on. Considering his age (14? 16? More?), aggressive action was problematic. We made the hard decision to let him go as gracefully as possible.

When we adopt a dog we implicitly make a bargain that we will be a responsible owner, which includes making difficult decisions.

This is the part of that bargain that really sucks.

Nonetheless I would not have it otherwise. As my brother wrote this morning, ‘It really sucks that our dear four legged friends will almost certainly die before we do. Even knowing that I would not give up the love, affection, friendship and fun they give us.’

The Bentley is a forehead blaze common to Australian Cattle Dogs and ACD crosses. When an ACD goes on ahead, the ACD world says ‘His (her) Bentley is glowing brightly.’ 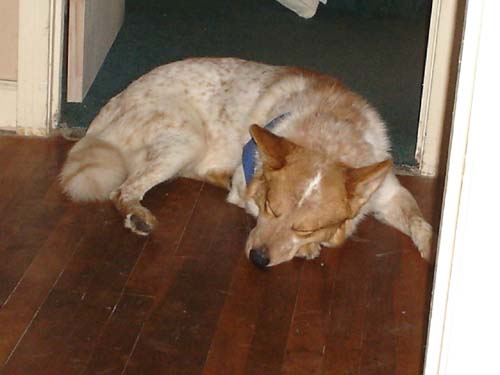